Charles Simonyi, formerly of Microsoft and now of Intentional Software is about to take off for his second flight to ISS via a Russian Sojus craft.

He will be the first non-professional astronaut to fly into space twice!

People always say that money doesn't make you happy. I guess that's true. But having enough of it to pay for your trips to space can certainly be a positive aspect in a person's live :-)  permalink    0 comments

The programme for the SEACON 2009 conference in June in Hamburg is now available.

Since Bernd Oestereich, Jochen Meyer and myself consitute the programme committee for this conference, I of course like and recommend the conference :-)  permalink    0 comments

A revoultion, if it works

Once again, if this stuff works, it will be a revolution. And Stephen Wolfram certainly isn't known to be a talker - he is usually able to do what he's talking about. Here's another article, and even something on spiegel.de  permalink    1 comments

Many languages defined with oAW Xtext have aspects in common. One way of exploiting this is to modularize language definitions and then composing specific languages from these modules. However, because of limitations of the current (4.3.1) version of Xtext, this is not necessarily a very viable approach.

The semantic annotation toolkit provides support for another approach. Languages are built from scratch (i.e. there is no reuse between grammar fragments), but the semantics of various language building blocks are still reusable. By annotating grammar elements with semantic annotations, the necessary Xtext infrastructure can be generated to make those grammar elements behave in a specific way.

Technically, this is implemented by generating extensions and checks as well as by model transformations and extensions of the meta- model.

Take a look at the latest documentation on the download page or watch this introductory screencast.

The programme for the 2009 edition of the Code Generation conference is available. I will to a keynote there together with Steven Kelly, and I will also do a talk on MPS together with JetBrains' Konstantin Solomatov.  permalink    0 comments

A couple of years ago I started consulting for ESO, the European Southern Observatory, Europe's organization for astronomy on the Southern Hemisphere. I worked a little bit on the ALMA project. Working with ESO is really interesting, because the final outcome of your work is really relevant, and sometimes beautiful scientific data. Once we were in the US, visiting the ALMA prototype antenna at the site of the VLA. Of course we took a tour of the VLA itself. That was one of my first "cool customer" experiences.

This week I had another one. I did some oAW consulting for the ESRF, the European Synchrotron Radiation Facility. This is a facility in Grenoble, France, where a giant electron beam is used to produce x-ray light, to facilitate experiments in all kinds of scientific areas. They have a huge storage ring where they keep the beam going, and whenever they push it around corners along the perimeter of the ring, the electron beam emits x-ray light which is extracted and used in (I think) 42 experiments running at the same time. Below is a picture of the circular experimentation hall. 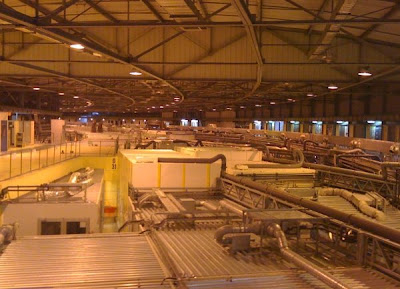 It was a real nice experience, they showed me around, explained everything, and of course I did an interview with one of the people there for omega tau. I stayed in the guesthouse on site, which also gives this a very special flavor compared to the standard hotel. It was also the first customer where I had to do a safety training right after arrival :-)

I really like working for customers like that, so if you are working for another scientific research organization, let me know: I am sure we can agree on an attractive daily rate :-)  permalink    0 comments

Photo of the Day

Today I was flying to Lyon on a Lufthansa 737. During landing in a very moist air I quickly captured the following photos. 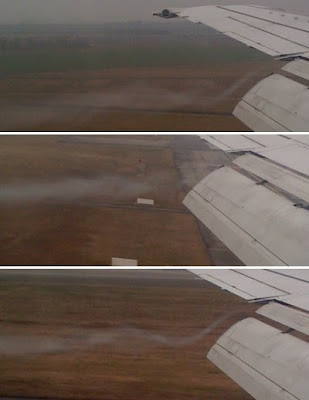 It shows wake vortices of the airplane. Normally, you see them at the actual wingtip. Here they come from the extended Fowler flap. They are a consequence of the overpressure below the wing and the low pressure above the wing balancing out around the tip. Because the airplane moves forward, the vortices look like a corkscrew .Imagine how powerful this work is his are at the actual wingtip! You don't want to accidentally fly into these with a small plane.  permalink    2 comments

Workshop on PLE and Variability

On Monday this week I was taking part in a workshop on product line engineering and variability at SE 2009 in Kaiserslautern (actually, on paper, I was a co-organizer. But Klaus Marquardt did all the work :-))

It was a very interesting workshop because a number of very experienced and interesting people took part. So the aspect of getting to know potential collaborators worked out very well.

But also the workshop itself was good. Klaus made everybody present their topic within five minutes on a single flipchart. Much more engaging than the typical PowerPoint stuff! And in the afternoon we had several breakout groups where people reported to really have learned something (I did, certainly).

So thanks to all the participants for making this a fun day.

PS: maybe at some point we are actually going to write up some workshop proceedings. I will publish them on the blog.  permalink    0 comments


FEED
You can get an atom feed for this blog.